I finally snapped a couple pics of my new bike.  It's the first motorcycle I've spent any money on right off.  Typically I don't customize vehicles, because I see that as wasted money.  It impacts me being able to get my money back out of them.  I also tend to buy used for that reason.  Nothing is better than buying something used, getting to experience it for a time, then selling it for what you bought it for.  It's one of the great attractions of firearms to me.

But, you have to do a little work to new vehicles, thanks to the EPA.  New cars don't run as efficiently as they could because they have to comply with EPA regs for cold start pollutants in a wide variety of conditions, 100 degrees at sea level to below freezing at 4,000' of altitude.  This means that many compromises need to be made, and efficiency suffers.  I've written about this before here and here. 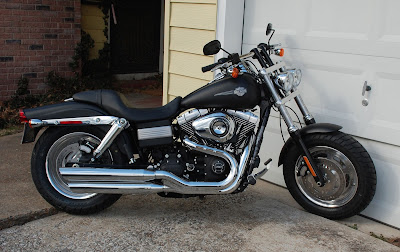 I'll start with a picture, so here it is stock when I got it home.  It's a nice looking bike all on it's own.  The front tire is nice and fat which makes bumps (curbs, ruts in yards, pot holes) more pleasant, and the front wheel enjoys dual brakes.  It is a bit shiny for a bike I plan to ride a lot, but that's easily fixed.  Chrome attracts water spots like nobodies business.  But back to getting the bike to run right by ditching the EPA crap.

Due to the above mentioned EPA regs, on most new vehicles sold in the US the consumer is left to make changes to the intake and the exhaust of their vehicle.  I've done this to almost every vehicle I've owned in the last decade.  In fact, when I last owned a Harley, a 2001 model, this was referred to as the "Harley Tax".  I've found that phrase is no longer in common parlance though.  But the term implies the consumer has to pay extra due to government regulation, which is pretty spot on.

So, I had this new bike, I needed to pay the Harley Tax since it did not run smooth with small throttle inputs.  Of course there are many companies that want to sell you kits to do this, but I'm a DIY sorta guy, and cheap to boot.  So I ordered some special hollow bolts, a new intake backing plate, a K&N filter and some misc hardware from my local independent hardware store and I replicated one of the kits for much less money.  It's not pretty, but it's functional.  I may craft some sort of cover for it at some point, but for now it works fine.

The exhaust was more challenging.  I pulled the stock mufflers, and decided to see what was inside.  I figured I could use the shell, as it's quite nice and heavily chromed.  I was right!  After drilling out 3 rivets on each muffler I was able to knock out the baffles.  The stock baffles are about a foot and a half long have tiny holes and are wrapped in two layers of fiberglass.  Alas, I neglected to snap a pic of them in their stock form.  I ran the bike a bit with no mufflers, and with the empty mufflers installed, and it wasn't as loud as I'd expect.  The catalytic converter quiets the sound down quite a bit, but without any baffling the engine didn't run right.  It stumbled a bit at idle and popped like a drum solo on any sort of deceleration.

So I needed baffles.  Rather than buy new ones, I mad the environmentally friendly (also cheap) choice to see if I could modify the stock baffles into something more useful.  The first step was to cut off the front cap where the inner and outer sleeve is welded together.  I don't really need two sleeves.  I then cut off the inner portion leaving the rear end cap and about 8" of pipe.  I drilled 4 rows of 3 quarter inch holes and re-installed this piece.  It ran much better, good torque everywhere, but even my wife said it was too quite.

Now, by too quiet I mean quieter than just about every other Harley on the road.  It was well quieter than an evo or twin cam running Cycle Shack mufflers with baffles.  You couldn't hear it run next to a bike with drag pipes.

So I decide to paint the stock mufflers and while they were off modified the baffles.  I cut two more holes in each row (total of 8 extra) and knocked an inch off the tube overall.  It's still pretty quiet, but I can hear it run on the highway and it's loud enough when I get on it.  If I pull the mufflers again I may cut another inch off, but for now you can at least hear it idle and it runs great.  I must say I'm impressed with the power this 103 cubic inch air cooled engine makes.

Of course, I didn't have the mufflers painted for two weeks before I drug them in a turn, scraping them.  Oh well, if you ride a bike it's going to not be in showroom condition.  I don't mind scrapes in pipes at all, except for when they start to rust.  And since this is the stock exhaust, it's not like I have any money tied up in it.

So at the moment I've got a solo seat on it and wrapped the header and mid pipe, and painted the stock muffler shells black with hi-temp paint.  It's not holding up well, mostly because I painted it like 12 hours before I installed and ran the bike.  I should have waited at least 24.  I'll have to pull 'em off again and redo them if I keep them, but the plan is for my friend to help me make a custom muffler.  We'll see which happens first.  In this picture you can see the plain K&N filter, I'll probably make a cover for it at some point, but it works well enough now.  I'm thinking about trying my hand at metal working and seeing what I can come up with. 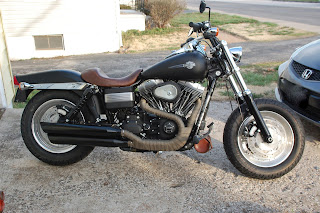 You may also notice different rear shocks.  I replaced the super chromed out stockers for Progressive shocks that sit .5" taller.  I figured it would help with the cornering clearance, although it seems to sit exactly as it did with the stock shocks.  I'm glad I didn't go lower for sure!   I like some clearance for getting over curbs and cutting through yards and getting more lean before something drags.  (see above!)

I'm impressed so far with the handling and the power of this bike.  It's not as fast as my old V-Rod, but it's fast enough and much more comfy for a passenger.  It's also quite a bit lower, which is nice for carrying a passenger who may be fidgety.   So far I'm pretty happy with it.
Posted by Pete at 7:22 AM