A Tale of Two Carbines

Why do I know syncing four carbs (or even two) sucks on a Japanese bike?  Because I've been able to experience it.  Why do I know knobby tires lock up easy on pavement?  Because I've done it.  (more than I've cared to!)  Why do I know how far a V-Rod will slide when you go down around 45 mph?  Because I went back and measured dammit!  (also why I learned two beers at happy hour effects my reaction time)  (especially when they are 32 oz beers)  (ah, the lessons of youth)

But this post is about rifles, or more specifically carbines.  A while back I went through the purchase process to acquire a 5.56 suppressor.  It involves buying the object, paying $200 for a tax stamp, getting your local Chief of Police or Sheriff to sign off on forms, fingerprinting, gluing photos to forms in duplicate and then submitting your application to the ATF for consideration.  Since I've been well behaved (enough, anyway) for my whole adult life, my application was approved after a few months.  I got to take possession of my very first suppressor (aka silencer or can) and also my first NFA item.

I decided that screwing a 5.5" silencer on the end of my 16" barrel made it a lot less handy.  It's not just the added length, suppressors add some weight, and putting a weight on the end of the barrel made it more difficult to hold steady over time.  But there was a fix!  I could submit an application to build a short barrel rifle (SBR), something that follows the same process as buying a suppressor.

Well, of course that takes another couple seasons.  So I get back my approved form and then I can start ordering parts.  Building a SBR doesn't cost any more than building a typical AR-15 carbine, so long as you ignore the $200 tax stamp.  So I end up with a silencer threaded on the end of a 12.5" barrel.  It was almost as quiet as a 22 and pretty handy.  With the silencer threaded on it gave the barrel an overall length of 17.25", similar to a 16" barrel with a flash hider or muzzle break on the end.

I learned something with that setup.  (and that's what it's all about, learning things first hand!)  It seems that thread on suppressors don't like to stay tight.  In fact, they can loosen up in just a couple dozen rounds.  This impairs my ability to use my suppressor on multiple guns (which was the plan) because if I don't use some sort of thread locker, it's coming loose all the time.  And suppressors get hot, so constantly cranking it down it's a great option.  But if I use a thread locker I need to use a strap wrench to move it between barrels and re-apply thread locker.

So I did that.  For a while.  Then I decided I mostly liked it on my SBR anyway, so I permanently affixed it using silver solder, which incidentally, is not nice to your finish.  But that bugger is on there now, tight, but most importantly it qualifies as permanently attached according to the ATF.   This means it's considered an integral part of the barrel.  I've got a couple thousand rounds through it since then, I can't imagine trying to get it off now with the carbon build-up on top of the solder.  I'm not looking forward to the day when I shoot out that barrel!

But, since my suppressor is now an integral part of the barrel, my 12.5" barrel plus the can worked out to just over 17".  (there is some overlap of the barrel and the suppressor)  Now it was just a regular barrel, one I could use on any old AR-15.  So I had to build another one of course and then order a new 12.5" barrel (since that's what was on my application and what is registered) for my SBR.  And you know what I learned?  5.56 and .223 ammo shot out of a 12.5" barrel is loud.  Very loud.  Not as bad as out of a shorter barrel, but noticeably louder than out of a 16" barrel.   Which of course means I need a new suppressor!

Since I now knew maybe thread on isn't the way to go if you want to use a can on multiple barrels I started looking at fast attach suppressors.  It seems I kept reading good things about Surefire's mounting system.  And some mishaps involving other brands.  So Surefire it was, even thought they cost a bit more.  It's something I'll have until I die, so $150 extra doesn't seem unreasonable, right?  Now, since I could use it on multiple barrels I decided to go with a .30 caliber can this time, so I could use it on cartridges like .308, 6.8 SPC, and 5.56 guns.  That's versatile!   Now, I didn't want a long heavy one, I decided that for the most part you still need hearing protection with rifle suppressors, so I went with the 7.62 mini.  Which, is the same size as the mid-size 5.56 can, so it should work nicely with 6.8 and 5.56 even if it doesn't offer class leading performance in full power rifle cartridges like .308.  But I'm a lot more likely to use a smaller can when I hunt, and that's the one time I shoot without hearing protection, so  can I will carry into the woods during deer season makes good sense.

This weekend my paperwork cleared the process at the ATF and I was able to pick up my new Surefire 7.62 mini.  It's awful pretty.  Well, it's not, but it's expensive, so I'll pretend it was pretty.  It worked out to just over double what my AAC Ranger 2 cost.  And honestly, if I was going through this process (which took about 3 years total) I'd do the same thing.  Both cans are useful in different ways.  I'm going to go out this weekend and see how they perform comparatively.  The Surefire is a smidge longer (less than an inch) when attached to the barrel.  I took some pictures with some measurements. 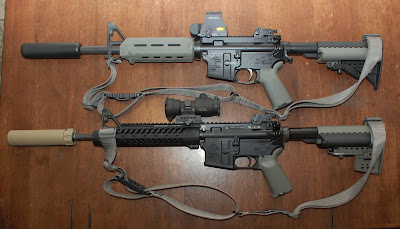 First up, both carbines, two ways to achieve similar results.  The top carbine, with the cheaper suppressor permanently attached was well cheaper than the lower carbine.  But on the lower carbine (the SBR) I have the ability to pop the suppressor off and have a shorter package.  It's very light and it works well when working with people who are small of stature.  The top carbine is about the same length as a standard carbine with a flash hider, but it's a bit heavier.  And yes, my colors don't match.  Look at me not care.  :-) 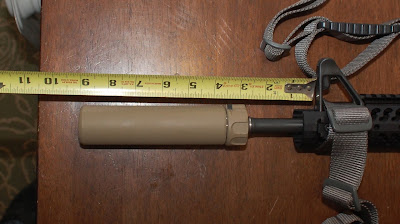 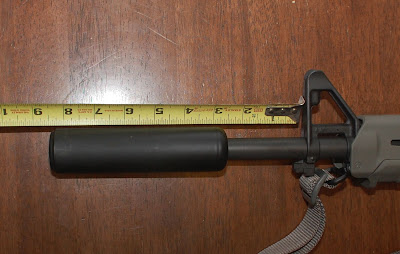 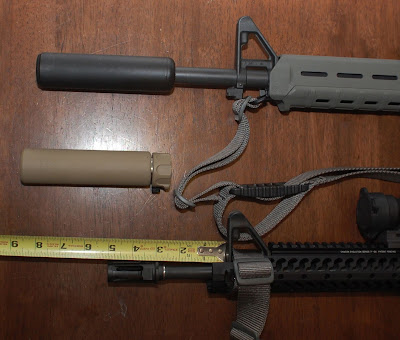 Now, another reason I went with the Surefire for a quick detach can is they advertise a very minimal point of impact shift with the can on vs off.  I'm curious to see what it ends up being.  Adding a weight to the end of a barrel adjust the harmonics when you fire, which will shift point of impact.  I've seen barrels impact 8" apart when equipped with a can vs bare, so I'm curious to see how much my shift is with this one.

The Ranger-2 mounted up comes in at around 8.5" past the barrel, just a bit shorter than the other combination.  I'm curious to shoot these back to back and see how they handle and sound differently.  This last picture is of the SBR with the can off to give you an idea of the length that way.

So there you have it, different ways to achieve similar goals.  The top carbine is about as cheap as you can go and use quality parts, the lower carbine, the SBR is a little fancier.  By "a little" I mean about $1000 fancier.  But I've got more options with the SBR and detachable can, and I've had a great experience so far with all this.  When compared against a university course, I'm still coming out way ahead when you compare cost vs knowledge gained!

One thing to keep in mind if you decide to build a carbine like the upper one is you are not permitted to possess a 12.5" barrel for an AR-15 if you own a standard AR-15.  The ATF considers that "constructive intent".  To possess that barrel you either need a registered SBR lower with no barrel attached or a lower receiver that is built as a pistol.   That ads some cost.  The alternative is to have the parts delivered to a local SOT / gunsmith and have them permanently attach the suppressor to the barrel before you take possession of it.  Don't play around folks, these are federal felonies if you mess up.  Know your laws before you start doing something like this.

Also, AAC has superceded the Ranger-2 with the Ranger-3.  The difference?  The Ranger-3 has a collar built in that can be pinned and welded to the barrel, a method most gunsmiths are comfortable with since many flash hiders are attached that way.  Finding a shop to silver solder mine (it take special torches and an experienced hand) took me a few calls.  If the Ranger-3 was available at the time of my order, it would have been an ideal choice.