All Hail the Police State, part 9

First we have the Department of Homeland Security (you know, that department that didn't even exist a few years ago) working with Amtrack to implement new security protocols on trains.  You know, because trains are constantly used by enemies of the state.

Second, we had a terrible mass murder over the weekend in a small town in Wisconsin.  Incidentally, this shooting took place in a building which was a gun-free zone, again showing that criminals don't follow regulations.  But that's not the issue I want to discuss.  It's the response to this event and more importantly how it was covered by the media.  FBI rolls in troops and armored vehicles and only foreign news sources report it.

This murder was awful, but in general murder is a local police event.  In this case the FBI rolled in with troops and armored vehicles.  That seems like a disproportionate response to an angry man with a gun.  But more interesting is that domestic news sources, like MSNBC, CNN and FOX neglected to report on it.  To get this news we have to go across the pond.

Increasingly we see the large media companies in this country working as marketing arms of government.  The idea of an independent press is falling by the wayside as these companies spend their resources garnering favor with government officials and increasing revenue.  Troops and armored vehicles being deployed in a small town is news, and stories like that are not being reported on repeatedly.  It's another step in the process of the USA becoming a police state.

BTW, here are a couple pictures from the UK Daily Mail.  You won't find these pictures or accounting of the FBI involvement in any major US news source. 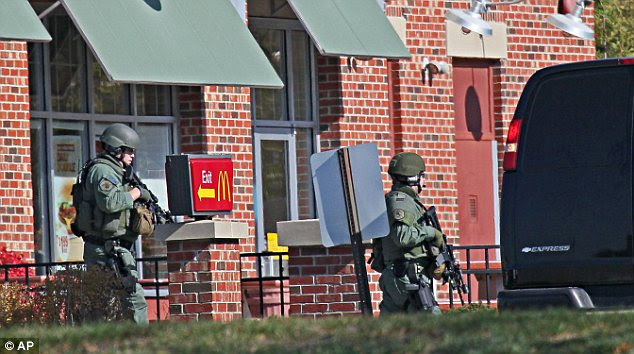 It's reprehensible the domestic news companies are complicit with this movement.  They will continue to be until their readership makes it an issue.

Which, I generally avoid the big news webpages.  From time to time I go to CNN, FOX and MSNBC to read a story or two there, and I'm dismayed by the content there.  It's all celebrity gossip, reality shows and shock news.  It makes me sad that those are the stories that sell, which is exactly why I won't visit their sites and support their advertisers on a regular basis.  Every hit to one of their websites generates revenue for them and I can't support that.