I am an avid reloader, also known as handloading.  This is the practice of making your own ammunition.  Some people do it as a cost saving measure, some people do it to control the consistency (and thus accuracy) of their ammo.  Some people do it to create ammunition they can't easily find.  I do it for a mix of those three reasons.  I can produce common revolver cartridges, like 357 magnum and 44 special, for half of what a store-bought ammo costs.  I can create rifle cartridges that are suited for a specific purpose.  I can create light loads (my specialty) for new shooters- cartridges that offer less recoil and muzzle blast but are still quite accurate.  The brass case of a cartridge can be used many times, so it's environmentally friendly as well.

Last night I had a friend over who loaded up some 223 cartridges.  Over the years I've collected a variety of different 22 caliber bullets and I thought I'd line some up and take a picture, then discuss differences in bullet design. 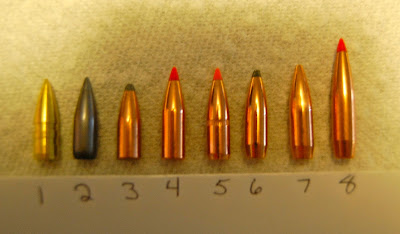 I lined them up from left to right based on the bullet weight.  There are LOTS of 22 caliber bullets available, it's one of the more popular calibers.  These bullets represent a small selection, they just happen to be what I had on hand.  They are in order:
1. Barnes Banded Solid, 45gr
2. Hornady V-Max Moly Coated, 50gr  (I have no idea how I ended up with these)
3. Hornady Soft Point, 55gr
4. Hornady V-Max, 60gr
5. Nosler Ballistic Tip, 60gr
6. Sierra GameKing, 65gr
7. Nosler Hollow Point Boat Tail, 69gr  (Match bullet)
8. Hornady A-Max, 80gr

I'm going to use these examples to discuss general bullet construction and use.  You'd think there would be a direct correlation between weight and length, but as you can see in the picture that isn't the case.  It would be the case if all the bullets in the picture were of the same construction type.  But they aren't, which makes it more fun!

The first bullet has no lead in it.  This makes it longer than a bullet that does have lead in it, for a given weight.  Lead free bullets are mandated for hunting in certain areas.  But the other materials used, like copper, are less dense than lead.  They are also more expensive as a raw material and more expensive to manufacture.  But keep in mind that if you are switching to a lead free bullet, it's going to be bigger than a bullet with lead in it.  Bigger bullets leave less room in the cartridge for powder, so you may get less velocity comparatively.  In my experience, lead free bullets tend to be very accurate and consistent, so they make a good choice for hunting.

Next in line we have a 50gr bullet that has a plastic tip (which is very hard to discern) and is covered in molybdenum disulfide.  Someone must have given me these bullets because as a rule I avoid moly.  It's messy.  I don't like messes.  But notice that even with a plastic tip this bullet is the same length as the lighter lead-free bullet next to it.  The plastic tip is used for a couple reasons.  It doesn't deform if the bullet is handled roughly and it provides a consistent and smooth tip, something that is good for aerodynamics.  It helps the bullet expand when it hits a target.  Lots of bullets are using plastic tips today.

Number 3 is a more traditional bullet, a simple lead soft point bullet with a copper jacket.  A bit of lead is left uncovered at the tip to help with expansion.  For decades this is what a hunting bullet looked like.  The copper jacket keeps the bullet from leaving lead in the barrel when it's fired, a problem that all lead bullets can have.  Notice that even at 55gr this bullet is a bit shorter than the 50gr plastic (or poly) tip and 45gr lead free bullets.  Overall jacketed soft point bullets are some of the densest bullets you'll find.

4 and 5 are very similar offerings from different companies.  Both are copper jacketed lead bullets, like the 50gr moly bullet at #2.  The Nosler has a cannelure (groove used for crimping) which some people like to use for semi-automatic loadings.  If you crimp the case at the cannelure it will prevent bullets from getting pushed deeper into the case as they rattle around in a magazine.  This bullet also has a boat tail.  This describes a bullet that tips in at it's base.  This improves the aerodynamics.  As you see all the bullets to the left of #4 have boat tails of varying severity.

Number 6 is the same sort of construction as number 3, only with a boat tail.  Why do the heavy bullets have boat tails?  Aerodynamics affects how fast a bullet slows down as it's traveling.  For a given cartridge a lighter bullet will start off moving faster than a heavy bullet, so with heavy bullets it's more important they don't lose speed.  The slower a bullet starts off and the faster it loses speed the more it drops over a distance.  That's why heavy bullets tend to be more aerodynamic- if they weren't they would drop unacceptably at longer ranges.   There are two measurements that are used to describe aerodynamic properties in bullets, Ballistic Coefficient (BC) and Sectional Density (SD).

Bullet number 7 is a similar design to 3 and 6.  It's a lead core with a copper jacket.  In this case rather than leaving the lead tip exposed, the copper jacket covers the whole bullet.  This particular bullet has a tiny hole at the tip (from how it's manufactured) and there is a very small cavity where the lead stops and the jacket continues.  This is just a byproduct of how the jacket is applied.  This bullet is used primarily for match shooting, and it has a thinner jacket than most bullets.  This gives it more lead for it's weight, which increases it's density.  Even though it's a similar design to the soft point bullets, this bullet wouldn't be suited well for hunting.  The thin jacket will easily separate from the lead core, which will likely fragment.  Rather than a deep channel it would result in a shallow messy wound most likely.  Or maybe the lead would stick together and you'd get penetration to vital organs.  It's hard to say, thin jacketed bullets tend to be less consistent in their performance when they hit something solid.

The last bullet is a poly tip boat tail.  Look at how it dwarfs the other bullets shown here!  Imagine if the same amount of bullet was sticking out of a cartridge how deep this bullet would be inside that cartridge case.

That's why cartridges have a specific range of bullets they are best suited for.  A person could make a 22 caliber bullet that weighed 150gr, but it would be so long there wouldn't be room for very much powder in most 22 caliber cartridges.  Each cartridge has a specific range of bullet weights and lengths that will work well.  In fact, there isn't a gun I'm aware of that could shoot all these bullets well.  Some guns would shoot the lighter bullets better (meaning more accurately) and some guns would shoot the heavier bullets better.   It depends on what 22 caliber cartridge the guns are chambered in and how the barrels are constructed.

But the subject of ballistics is very involved, and I'm certainly not an instructor.  I just wanted to share some basic information on bullet design and let people know that there are a variety of bullet types that can be selected according to your use.

If you think I have any errors or have explained anything here poorly, or just want to add something, please feel free to leave a comment.
Posted by Pete at 2:25 PM