The Downside to Firearm Suppressors

Other than the cost, lengthy process to acquire and weight a suppressor (or silencer or muffler as they are commonly called) there is another downside.  It's a downside a lot of people don't know about, or don't properly appreciate, until they own one.

I come from the "only clean guns when it's needed" camp.  When I was a new shooter I broke my guns down and thoroughly cleaned them after every range visit.  Now wipe them down and take a couple minutes to wipe out the action with CLP and that's about it.  The guns I use the most, Ruger 22 pistols and rifles, Glocks and AR-15's I only break down to clean every couple thousand rounds.

Well, except for my suppressed rifle.  I have an AR-15 with a suppressor attached and it's awesome to shoot, so much more civilized than unsuppressed rifles.  But suppressors create backpressure.  Since the AR-15 uses the gas created from the burning powder to cycle the action, a suppressor pushes more gas with more force back into the action.  In general, burning things are dirty, and powder used in modern cartridges are no exception.  This makes the action of an AR-15 dirty as this gas cycles back into the action. 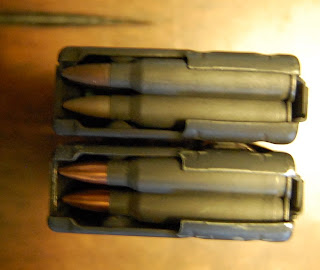 That said, I ran my suppressed gun in a class where the round count was 500 or so.  I sprayed some CLP on the bolt at our lunch break and the gun ran perfectly right all day, dirty or not.  50 rounds through that gun and the action is filthy.  500 rounds through most AR-15's and they are just starting to get dirty.

Just thought I'd share my experience for anyone who's been considering buying a suppressor.  I totally recommend one!
Posted by Pete at 1:03 PM