If you've been following the news, you know that President Obama has tasked Biden with heading a committee to draft a new gun ban.  As well, Diane Feinstein stated she would be introducing a new gun ban bill on the first day of the legislative session.  This shouldn't shock anyone, as she introduces gun control legislation with regular frequency.  Whether or not her bill will end up being the bill Biden recommends remains to be seen.   But today we have Feinstein releasing her bill, so we can discuss that.

Shockingly enough, I'm mostly against gun control.  My basic reasoning can be found in an earlier post, one that describes that all atrocities against humanity have been carried out by governments.   A bad man can kill a few, or maybe a few dozen, but anytime there are tens or hundreds of thousands dead, a government is involved.  Since all governments trend towards gathering more power and control over time, it's reasonable to be concerned about just when your particular government will do something truly awful.  History shows that the vast majority of governments end up committing atrocities, so it's reasonable, even wise, to be concerned about preventing that.

Here are the main points of the new gun control bill, and my thoughts on them.

The law bans the sale, transfer, importation or manufacture of a lot of common firearms.  120 of these are called out by name, and it also includes all the guns included in the last Assault Weapons Ban and a lot of additional ones.

It calls out certain features as "military characteristics".  This is something legislators love to do, create new definitions for term.  Keep in mind it was politicians that created the term "assault weapon" by defining a class of firearms based on how they look via law.  This new ban affects all the previously defined "assault weapons" and includes a lot more.  To qualify under the last AWB, you had to have two "evil" characteristics, all of which are cosmetic features.  Now, you only need to have one.  The characteristics include:

Added to this list is:
- Thumbhole stocks
- Guns that use Bullet Buttons to attach magazines

The last two items were integrated specifically into modern firearms so guns could be compliant with the last AWB.   Thumbhole stocks have been used by target shooters for many years.  They lock the hand in a particular spot, so a grip on the rifle is easy to replicate exactly.  Competitive shooters, like Olympians, often use this sort of stock because consistency translates into repeatable accuracy.  When guns could no longer have pistol grips, thumbhole stocks were used to provide similar hand positioning to a pistol grip while being compliant with the law.

A bullet button is a device that makes a detachable magazine mechanically attached.  They still see common use in California, where detachable magazines are not allowed on rifles.  The device replaces the magazine button with a release that requires a tool to operate.  Again, these made rifles that people owned compliant with the law.  It increased the time needed to reload the firearm, but for rifles designed around a detachable magazine, it was the only way to make them compliant short of welding or machining.

The collapsing stock has always mystified me.  The most common collapsing stock is the one commonly found on the AR-15.  Most of them adjust 3".  For example, when fully compressed they are 7" long, when fully extended they are 10" long.  (yes, I just measured)  Now, you are permitted to have a 7" long stock.  Or a 10" stock.  But a stock that can change between them turns your gun into a prohibited firearm.  This is worthless regarding crime prevention.

My daughter is 5'.  I'm 5'10.  My good friend is 6'4.  A stock that adjusts allows for each of us to comfortably use the same rifle.  Well, maybe not comfortably, my tall friend would be more comfortable with a longer stock, maybe in the 12" long range.  But my daughter likes the stock fully collapsed, I prefer it in the middle, and taller people like it extended.  It's ergonomics.  Why that is even a factor in the law I can't say.

By the way, if I took that collapsing stock at the 7" length and drilled a hole in it and drove a pin or bolt into it so it couldn't extend longer, it would be a legal characteristic on a gun.  I try to be open minded, but that's just plain stupid.

A grenade launching attachment as something that should be banned always cracks me up, because they are worthless relics.  Some old guns that were designed for military use have them, but nobody makes the grenades for them or the special ammo needed anymore.  And if they did, it's not like you could buy grenades anyway.  I'd challenge any of the sponsors of the bill to show me one instance where a grenade launching muzzle device was used to launch grenades in a crime.  Today if someone has access to illegal grenades, they likely have access to much more modern ways to use them than a rifle from WW-I with some proprietary Rube Golberg muzzle device.

This sort of bill plays into the hands of the people who support gun rights.  They often suggest that the end result of any gun control law is to incrementally take away all guns.  We can see this here- this bill includes guns that weren't classified as "assault weapons" by the last law.  It's more expansive than the last law, and as I'll show in examples below includes rifles that would be banned by this new bill.

So here is the problem, we'll start with the most popular rifle sold in the US, the Ruger 10/22.  It's a 22 caliber rimfire rifle and they have been the best selling rifle for more than a dozen years.  These regulations would not ban this 22 rifle, the Ruger 10/22 carbine.

But it would ban this one, the Ruger 10/22 US Shooting Team edition. 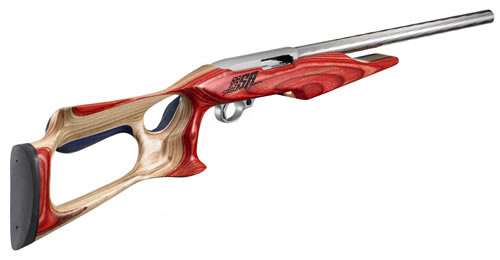 They are variants of the same rifle.  The top one is lighter, has a shorter barrel and quality sights.  The bottom one is heavy and worthless without a scope since it lacks iron sighs.  But because of the shape of the stock it's banned by this new bill.  Neither are likely to be used in crimes, but the bottom one less so.  It's unwieldy and designed specifically for stationary target shooting.

Here is another example.  This rifle, the FNAR is a 308 semi-automatic rifle.  It was allowed under the last ban but included in this bill as a prohibited firearm.

And here is the Browning BAR that it is based on.  It's not covered under the old law or the new bill.

So, when I say "based on", what I mean to say is "exactly the same".  They are identical mechanically, the only difference is the stock.  One has a pretty wood stock and a magazine that barely protrudes beneath the gun as original equipment.  The other one has a plastic stock with a pistol grip and a magazine that holds more cartridges.  In the hands of a rifleman, both are going to be capable of identical feats of marksmanship.  Now, you can use a smaller magazine in the one with the plastic stock and a larger one in the one with the wood stock.  But the lower one looks more like a hunting rifle so it's not considered dangerous.

The next reason I don't like this law is it grandfathers all the existing guns that would be banned, but they have to be registered as NFA items.  As a person who has registered several NFA items, that is a draconian process to go through, even comparing it to other government programs.  Registering something as an NFA item requires fingerprints, photographs attached to duplicate forms, a sign of from your local chief of police or sheriff and as of now, about an 8 month wait for the paperwork to be processed.  The wait serves no purpose, it's just government efficiency at work.  In 2001 the ATF processed 105,000 NFA transfers, their all time record.  Processing that many pushed wait times from 3 months to 8 or sometimes more.  Imagine adding tens of millions of forms to that queue, since even conservative estimates suggest there are almost 4 million AR-15's legally owned in the US.  The backlog would reach decades unless the ATF scaled up it's operation significantly.

The next issue is the part where it says it bans the "sale, transfer, importation or manufacture" of these black-listed guns.  That means that any owned today can never be sold or given to anyone else.  It makes them something that is worthless when a person dies.  It effectively takes away property without recourse.

The "grandfather" clause registers these guns as NFA items.  Register is an important word here.  History has shown repeatedly that registration leads to confiscation.  It's a step towards disarming citizens of this country.

Lastly, it bans magazines that hold more than 10.  Why 10 was chosen, I can't say.  But most modern handguns were designed around higher capacity, and it makes the normal magazines for those guns illegal.  I've never really figured out why 10 shots is OK, but 11 or 13 or 16 is bad.  Oleg Volk has a bit to say on that subject, it's worth a read.

Lastly, it's not proven in modern first world countries that gun bans prevent mass killings.  Gun control advocates often use the UK and Australia as examples.  It's true, Australia hasn't has a mass shooting since they passed their law that confiscated guns from their populace.  However, they had never had one before that either.  A single incident is an anomaly, not data.  If they would have posted armed guards at schools, made no changes to the laws or sacrificed a virgin to stop more mass shootings it likely would have had the same effect.  Violent crime, and specifically gun crime, is up year after year in the UK.  Just this year gun crime is up 50%, so that's also an example that doesn't stand up to scrutiny.  Those are the "good" examples of gun control.  There are lots of countries with gun control where there are still awful mass murders, like Norway.

That's my short take on the new gun control bill.  I think it's too far reaching to make any headway in congress, but congress doesn't seem too concerned with civil rights and civil liberties as of late, so maybe they do want to disarm the populace.  If you want to see the NRA opinion on the bill, you can see that here.
Posted by Pete at 5:40 PM