I often read new reports of shootings and have come to accept that they are less focused on facts and more on sensationalism.  After all, news organizations are multi-million or even multi-billion dollar corporations.  They are in it to make money and the juiciest stories do that.  But one of the terms that bugs me is "high powered assault rifle".

There are lots of places on the internet where you can read about the term "assault rifle" and understand it's used incorrectly much of the time.  So I'm not going to rehash that.  The part of the term I'm discussing today is "high powered".

223 Remington, 5.56 NATO, and 7.62x39 are not high power rifle rounds.  They are intermediate power rifle rounds.  That doesn't mean they aren't effective for hunting or defensive use, because they are.  But referring to them as "high powered" is a misnomer.  I'm going to show some examples here and let you decide for yourself.

The most common bullet weight used in 223 rifles is 55gr.  This is a pretty light bullet, considering that 22 rimfire ammo is commonly found in 40gr bullet weights.  But the 223 moves a lot faster than a rimfire, and that's where the cartridge get's it's effectiveness.  Here is an example of a standard load, the Federal XM193 which has a 55gr FMJ BT bullet that leaves the muzzle at 3125 fps from a 16" barrel and has a BC around .245.

The bullet starts off at 1,100 ft-lbs of energy and by 100 yards it has around 900 ft-lbs of energy.  That's a lot more than typical pistol rounds have at 10'.  So even though it's an intermediate power round, it's still carries a lot more energy than a projectile shot from a typical handgun.

At 200 yards we've dropped to  700 ft-lbs, still a lot.  Since this cartridge relies a lot on velocity, the energy drops quickly as velocity drops.  But it still has more energy at 400 yards than most 9mm bullets have a 10'.  An intermediate power rifle is more effective than a handgun.  But compare that in the chart below to other high power rifles.

I've listed loads from Nosler simply because their website is easy to look up information on, by no means am I using this to pimp for their ammo.  It's typically a bit pricey for my tastes, but it generally held to be excellent quality.  All of these cartridges are regarded as hunting rounds, and the last 3 considered "high power rifle rounds" by most people.

But what we can see here even a varmint round like the 22-250, which is commonly used for small animals like groundhogs and prairie dogs, has more power than a 223 or 5.56, especially at longer ranges.  When we move up to 243 Winchester, one of the least powerful rounds used for medium game hunting, we can see it's quite a bit more powerful, it has twice as much energy at 200 yards and beyond.    When we move up to 300 Winchester Magnum, a popular elk round, and we have 4 times the energy at 300 yards as our intermediate power round. 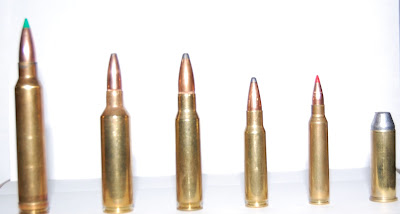 Those bigger cases hold a lot more powder, sometimes twice as much or more.  That produces more power, more velocity and more recoil.
Posted by Pete at 11:45 AM