How the EPA makes the environment worse, part 1

This could be a 20 part subject, but today I am focusing on one way this happens- noise regulations and their effects on automobile engines.  The Environmental Protection Agency was tasked by congress to develop noise regulations for trucks, automobiles and motorcycles.  While noise pollution is a serious issue in many urban areas and on the highways, there are certain regulations that end up being worse for the environment.

First on tap is intake noise on automobiles.  In 1970 every car was sold with an air intake that sat on top of the carburetor.  There was a very short distance from where the air was mixed with fuel and where the air was drawn from.  Air is a necessary ingredient in combustion.  The larger source of cool air, the better.  Cool air has more oxygen in it than warm air and allows the engine to run better.  I'm going to assert that engines running better are good for the environment.  They generate more power at lower RPM's which ends up as better gas mileage.  Getting more efficiency out of existing engines is one of the best ways to be a good steward of the environment.

Next I suggest you go look under the hood of any car made in the last 10 years.  See if you can find the air intake.  I mean, there has to be a way that air gets into the engine somewhere in there right?  I bet you can eventually find the box the air cleaner resides in, but that box is going to have a tube that runs off to somewhere else in the engine bay or the fender.  That tube is probably 4-6' long and has a bunch of convoluted twists and oddly shaped chambers.  Any idea why?  Is it for efficiency?

No.  No it's not.  In fact, throwing a bunch of turns in between where the air enters the tube and where it gets to the combustion chamber is less efficient.  It makes the engine work harder to suck air in.  The reason all that tubing is there is to make the engine quieter to comply with EPA regulations.  See, the shorter the air intake plumbing is the more noise can escape from the intake side of the engine.  Also, if the engine is sucking in air from a spot right on top of the engine, that's noisier than if it sucks less air in from a farther away place like a fender well.

So this impacts the environment in two ways.  First, all the cars sold in the US are sold with intakes that are less efficient than they could be, which directly impacts gas mileage.  Not by a lot, but it's done to every new car sold.  Even .1 mpg is a big deal when it's affecting every car on the road.

Second, every new car sold has this needless hunk of plastic that's packaged with it.  Plastic is of course a petrochemical.  All those plastic parts are made from oil.  And they all end up in the land fill, either when the car is junked or when the owner realizes they can have a better running engine at a gain of 1 db of whooshy noise when they punch it.

These large sections of plastic tubing are called "intake silencers" by the automotive companies and "snorkles" by enthusiasts.  (ever try to breath heavy in a snorkle?  it sucks)  Here two I removed from vehicles I owned. 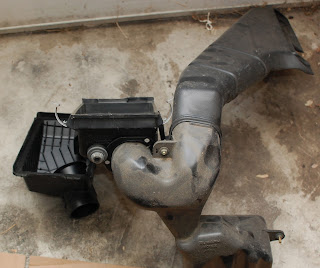 This one is from a 2006 Subaru Impreza.  The part that is extra dirty was inside the fender and served no purpose other than to waste plastic and make the intake noise un-whooshy.

The silly part is this was the WRX STi version of the Impreza, the special model that makes more power than normal Imprezas.  It was only purchased by people who wanted a performance car.  For them, a noisier engine is a bonus!  I have to say I enjoyed hearing the turbo spool up once I removed all that crap.  Even my wife who is not a sports car enthusiast thought the engine sounded better without it. 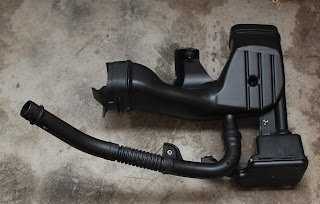 This one is fresh off a 2012 Honda Civic.  Once again, the performance model, the SI.  The one people buy because they want a car with a great engine.  This snorkle was entirely contained within the fender.  It amazed me it fit in there and took some work to get out!

What you don't see is there is another 2' of tube I left inside the engine bay that leads to the air box that houses the air cleaner.  That's a ridiculous amount of plastic tube to make an engine a tiny bit quieter.

Engines today are more efficient than engines of 20 years ago, or even 5 years ago.  A lot of that efficiency has gone into power, but recently we've seen manufacturers step it up in the gas mileage department.  It's not uncommon at all to have an engine that makes 200hp and gets 30mpg.  In fact, there's a couple that make much more power and get that good or better gas mileage.  The new 300hp 6 cylinder Ford uses in the Mustang is rated at 31mpg highway, and the new 4 cylinder turbo BMW uses in the 328 is rated at 240hp and 36mpg highway.  That's impressive.  But it could be even more impressive if the EPA regs didn't force car makers to install extra intake piping to save a decibel or two at the cost of better running engines.

By the way, the same thing happens on the exhaust side of the engine.  Restrictive exhausts are installed to keep sound down at the cost of making engines less efficient.  The sound dampening at the exhaust end is much more significant though, so I won't spend time arguing that point.  I can see how that is a reasonable trade-off.
Posted by Pete at 11:31 AM