A couple weeks ago I actually experienced a squib centerfire round.  It was in a box of Wolf 9x18 (9mm Makarov) that I've had for an undetermined time.  It was maybe only a couple months old or maybe 5 years old.  I can't say I keep that kind of track of my pistol ammo. 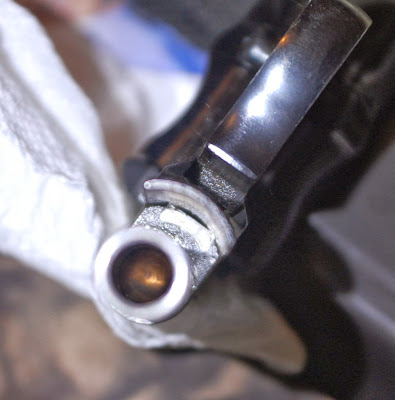 What is a squib?  It's a round that either doesn't have powder in it (only a primer) or the primer doesn't ignite the powder at all.  You get some sort of "pop" instead of a bang.  This small pop is often enough to lodge the bullet in the barrel.  If you pull the trigger and nothing happens that's called a dud and isn't the issue here.

In this case the squib load did lodge the bullet about halfway down the barrel.  There was enough power to move the bullet, but not enough to get it through the barrel and headed towards the target.  This is a very dangerous situation!  Anytime you get a squib load, or any cartridge that sounds significantly different than the others you need to stop, unload the gun and inspect the barrel.  If a bullet is stuck in the barrel and you fire again you are likely to burst the barrel, blow the top of the gun up and hurt yourself and others nearby. 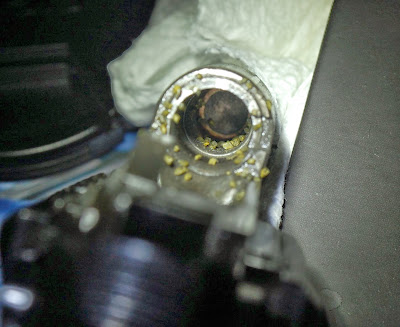 How can you tell a squib?  It's very obvious.  This one sounded like a cap gun going off.  If a bullet doesn't clear the barrel then you aren't getting any sound out that way.  If it's way underpowered it's not going to open up the slide and allow noise out that way.  It's a lot quieter than a normal round.  Do not fret, if you experience one you will have known it happened.

So what does a round stuck in a barrel look like?  Well, like this.  Notice the shiny copper bullet in the barrel.  To see it from this vantage point you need a light, and the pistol needs to have been unloaded and preferably disassembled.  Pointing a gun at your eye isn't something you should do without taking all the precautions you can first. 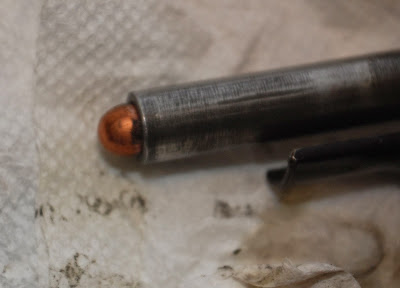 In this case, the primer didn't ignite the powder.  It could be because there wasn't enough powder.  Maybe the primer was weak.  Maybe the powder was bad.  It's a Russian round, and their QC isn't known to be top notch.  I can tell there was at least some powder in the cartridge because it was all over the chamber.  It doesn't look like any powder I use when I reload, but I made a tiny pile with some and lit it with a match and it acted like smokeless powder.  In this picture you can see some of the powder and the base of the bullet.  This particular bullet has exposed lead at it's base, the copper jacket doesn't fully cover the whole bullet.  Because of this it's not as shiny from this perspective.

To get the bullet out I grabbed a section of an old broken cleaning rod.  It was aluminum so I didn't have to worry about tearing up the barrel.  I slid the rod in and gave it a couple taps with my Leatherman.  It didn't budge.  Always push the bullet in the direction it was traveling, trying to push it the wrong way can damage your barrel and make it harder to get it out.  But after an initial try I realized it wasn't going to easily tap out.  It was time to get some real tools and lubricants involved.  This would not have been an easy fix in the field. 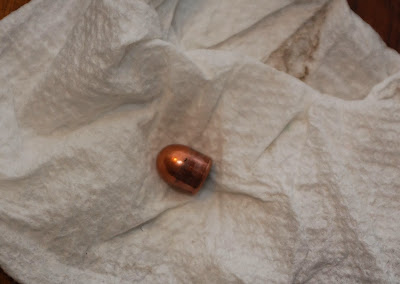 I dropped a couple drops of Kroil down the barrel and waited a few minutes.  Then I used a real hammer to tap on the rod.  No movement.  It ended up taking both penetrating oil and 20 solid whacks with a hammer to get the bullet out.  You can see the picture of the bullet most of the way out, it's a perspective you don't get to see very often!

The last picture shows what the bullet looked like once it was removed.  It was in pretty good shape.  The gun it was lodged in uses polygonal rifling, I'm not sure if that made it easier or harder to push through the bore.  But in the end the bullet was cleared and the barrel was undamaged.  It cut a range visit short, but no harm was done and I learned a thing, so I'm calling it a win.