Why Should People Own AR-15s?

This is a question that often gets asked after a mass shooting, and it's a reasonable time to discuss the subject.  Mass shootings would not be as impactful if the evil men that committed them were limited in what guns they have access to.  If only black powder guns were available then mass shootings would involve less casualties.  If fully automatic explosive gyrojet rifles or laser machine guns were available, then casualty counts would likely be higher.  Technology creates ever more powerful tools as time marches on, and firearms are among those. 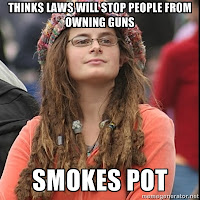 I'd like to discuss guns, their availability and laws regulating firearms.  As any user of illegal drugs can attest, making things illegal doesn't make them go away.  It can work to restrict access by citizens who follow the law.  But many laws don't dissuade people who are devoted to breaking them.  Look at the prevalence of pot, and flagrant breaking of traffic laws by people you probably know.  Sure, the laws cut down on the activity some, but they certainly don't stop it.

That's not suggesting we shouldn't have laws.  We should.  Without laws we can't have a civilized society.  But passing laws banning or restricting access to items that are in general circulation are generally not very effective.  For a 10 year period in the US there was a ban against a newly defined class of firearms called "Assault Weapons" and the sale of any detachable magazine that held more than 10 cartridges.  Even the advocates of this law can't point out a drop in crime or a drop in crime using the weapons banned during that time period.  It was largely ineffective.

But regardless, I wanted to discuss why a civilian should want or even need to own an AR-15 style rifle.  There are lots of reasons depending on your views.  You may find you agree with one or more of the reasons listed.

1.  It's arguably the best tool to defend yourself and your family.
I've written blog posts on just this topic, the AR-15 offers a lot of advantages as a home defense weapon.  It's powerful enough to stop a determined attacker.  It's one of the lightest and smallest magazine fed rifles on the market, making it suitable for smaller people, children and people with physical disabilities to use.  The most affordable ammo is both effective for defensive use and fragments quickly when it hits barriers, like walls.  This reduces the chance that an errant shot will go through several walls and do property damage or harm someone.  It's harder for an attacker to knock a rifle out of a person's hands than a pistol.  It's very ergonomic and easy to maintain and has proven to be both reliable and durable.

2. It's the most popular and best selling rifle today
Since 2009 AR-15 rifles outsold any other type of rifle.  If you need one repaired any gunsmith can work on it.  It's the equivalent of owning a Camry or F-150 (the best selling car and truck for many years running), you'll never have to worry about not being able to find parts.  It's the most common rifle used in advanced training classes by far.  It's the most common rifle used by police departments.  It's commonly used in shooting competitions.  It's increasingly used for hunting medium and large game.  Support of the platform will continue for decades.

Rifles are expensive, so it makes sense to want something that you can hand down to future generations.  AR-15's certainly fit the bill.  They can be adapted for almost any hunting in North America, and work as a competition rifle, a home defense gun and something to take to the range for affordable practice.

3. Variants are used by militaries around the world
This offers a couple of advantages.  Military budgets are being constantly spend on R&D for the AR-15 platform.  The military uses versions that are capable of full-auto fire, something more stressful on a rifle than how it will be used by a civilian.  Improvements are made periodically to the platform that become available on civilian models.  The rifle is more ergonomic and reliable now than it when it was introduced.  This is a benefit to the consumer as development of the platform is ongoing that continue to make it more durable, more reliable, more ergonomic and more accurate.

4. It's based on the rifle the US military uses.
If you are the sort of person who feels the second amendment speaks to the body of able bodied civilians as the standing militia, owning an AR-15 makes the most sense.  It's very similar to the M-16 and M-4 in use by our active military forces.  Owning and knowing how to use an AR-15 could be seen as one's duty as a citizen prepared to defend one's country should war be declared.

5. It's an appropriate tool to resist tyranny
An AR-15 is the least powerful tool that's appropriate for use in preventing and resisting a tyrannical government.  There are many more powerful or more capable tools that can guard against oppressive governments, but the AR-15 is pretty much the entry-level rifle one can use for that purpose.  As stated in an earlier post, governments are capable of much greater injustices and crimes against humanity than any other group.  Having an armed populace prepared to get involved to stop the most grievous infractions is often enough to prevent those in power from committing gross humanitarian offenses.

I'm sure there are other rational reasons a person would want to own an AR-15 or similar rifle.  These are the ones that come to mind at the moment.
Posted by Pete at 1:10 PM